Why Version control is important in a DAM
In their DAM, everyone has old versions of their company logo, or the less-than-perfect product shots, documents showing a product name that was later changed before release, or that photo of their CEO from the wrong angle. An object worked on by a collaborative team ended up going through 5 revisions, and we need the latest one in a hurry. Also, did legal get the final one, or did they only approve an early version? How about product “X” where we learned its name violated a copyright, so we had to re-shoot the pictures with its new name: which version did the ad agency grab for their video spot?

What could possibly go wrong?

Outside of lawsuits, lost time, missed deadlines, the impact of rework, and an irritated CEO, not much.

1) The people working on the object, whether creating, collaborating, designing, approving, or brainstorming, who need to see all versions of it: they may want to go back to a particular feature from an earlier version that they liked, or be able to trace when a particular change was made.

2) The rest of the company, who should ONLY see the final, approved and released version. As a new approved version comes out (for a logo for example) then worldwide the previous version needs to disappear from sight and not be possible to access.

The Approval Workflow is generally the final step before a new version of something is released into the wild: it has to go in front of the decision makers (typically Legal, Marketing, Sales teams) to make sure it is fit for public consumption. In general an Approval Workflow involves defining the decision makers, setting a deadline for their feedback, and marking the object involved. The DAM then makes sure each participant knows they have an approval task pending, and records their vote or comment.

The Usage History lets you trace who got the earlier versions, and where they appeared, in case you need to retract an earlier object. Every time an object is exported from a DAM, a record should be created with the destination, how it was to be used (web, print, report) and potentially the metadata specific to that use that went with the object.

I hope we have shown why Version Control is a DAM feature that helps remove the word “Oops!” from your vocabulary! 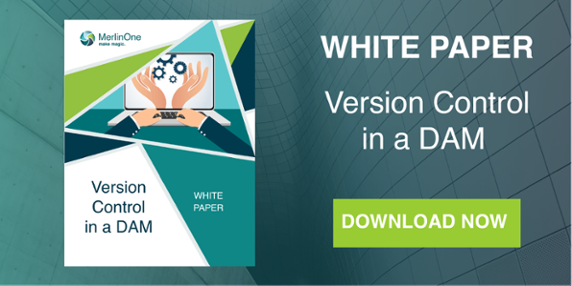