Let’s explore metadata and how it is used in a DAM.

What if a picture was actually a crate in the crowded Raiders of the Lost Ark warehouse? How would you find it?

Well, it sure would help of you knew stuff about the crate. Things like when did it get here? Who put it in the warehouse? How big is it? What color is it? How heavy is it? With clues like that, you stand a chance of having several ways to find it. The answers to those questions are metadata. The crate is the object, what we know about it are the metadata (literally means “data about data”).

It is the same with a photo in a DAM system. If you are looking for one digital object from a collection of thousands or millions, how are you going to find it? You need to know some of the following:

Who shot it?
When did they shoot it?
What does it show?
Who is in it?
When did we get it into our system?
Where was it taken?

And also other important stuff like: do we have the rights to use it?

If I need this metadata stuff so badly, how do I get it into my DAM?

Frequently it will be filled out by the photographer and be inside the picture file itself, in an industry standard container with a name like XMP or IPTC. Sometimes it will come in a separate text file called a “sidecar file”. And sadly, sometimes objects will show up with no metadata, in which case it will have to be added by hand, or in a clever system, by an automated process.

If your DAM is smart enough, it thoroughly searches each new inbound object for any metadata, doing things like finding the XMP or IPTC information inside the file and parsing it out, matching the sidecar file (if there is one) and getting metadata from it, or if the file is a PDF, opening up and looking inside the it file to grab all the text and make it searchable, or if an Adobe Illustrator map of the Middle East, pulling the names of places labelled on the map graphic like Egypt, Syria, Israel, and making them searchable.

Very recently another automated way to get metadata for an object is to use a visual recognition engine, which can identify landmarks, prominent colors, number of people, etc. This “Artificial Intelligence” engine holds great promise for enhancing metadata in the future,

To learn more about the importance of Metadata, download our White Paper, Metadata Best Practices, below. 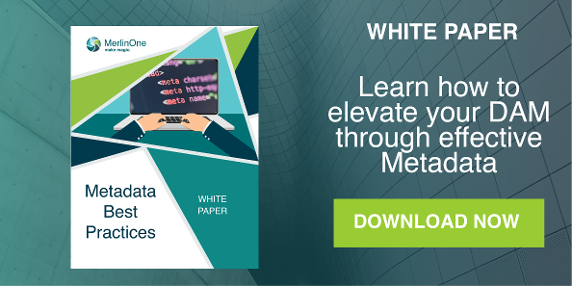